The Cove. How humane are we?

It´s late night, I´m sitting on the sofa after a long day , licking the rest of garlic shrimps and guacamole off my fingers, watching  what would qualify as a horror movie.  Except that I banned horror genre from my screen agenda. So why the exception? Most of horror movies are inspired by real stories. The difference this time, was that The Cove was/is a real story.  All in the lovely  Taji island in Wakayama, Japan. https://www.youtube.com/watch?v=4KRD8e20fBo

I did not like the way the Cove documentary  started, seemed like the typical, “uh oh, I´m exposing myself to terrible danger going through impossible obstacles just to reveal the dark truth about water being polluted and fishes being fished” . The documentary team was led by Rick O´Barry,  who has a long career as a Dolphin trainer, including working with the Dolphins that played Flipper for the popular American movie. A standard successful career that went on until, one day, Kathy, one of the Flipper Dolphins did not resurface. An eye-opening event that suggested delberate choice not to live. The Cove documentary starts with conspiracy rhythms, accompanied by dramatic music, cautious whispers, night visits to objective filming site. A secret hidden cove where the truth is to be revealed.   Little by little, you find out that the obstacles Ric O´Barry and his team face are real, and the verity revealed is a routine practice that branch out to cruelty, torture, fraud, and poisoning.  No exaggeration is applied to the discovered facts, no distortion, no out of context presentation, in the second half of The Cove, when you think it cannot get worse, you get surprised by how mistaken you are. 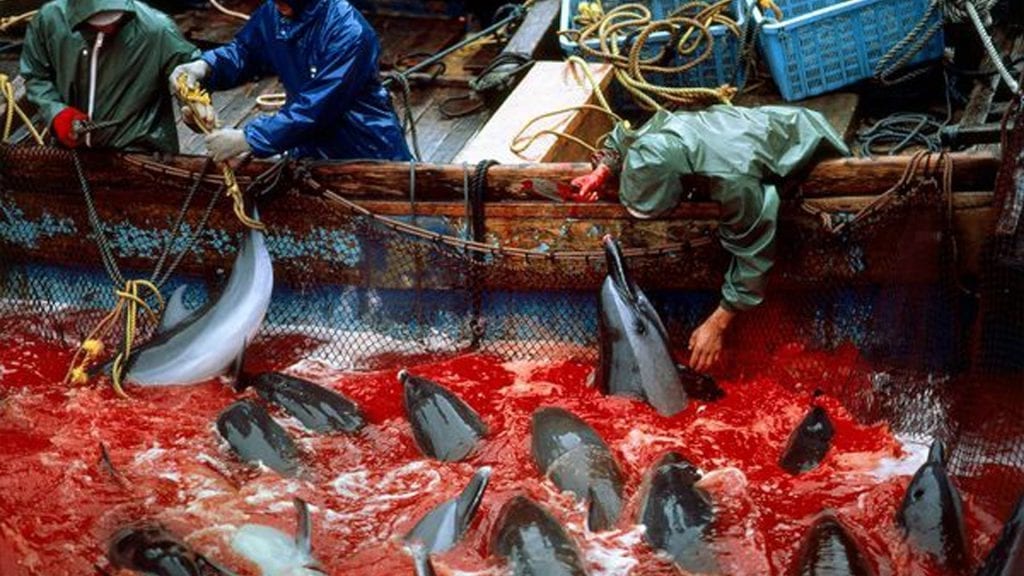 Entertainment! Yes! Pure, simple, entertainment; Entertainment industry, money, audience lapping innocent hands. Who wouldn´t like a visit to a Dolphin show! You need strong healthy talented smart Dolphins, so that human beings; families, kids and adults  can sit around a pool and watch dolphins race, jump, salute, swim, perform acrobatics, receive hugs and blow kisses to their trainers and the crowds. At what price? I still struggle with tears when I remember the scenes of blood tainted cove with baby  and adult dolphins harpooned, and savagely indiscriminately killed by their captors.  The process starts with – lets call them – Dolphin headhunters choosing from the herded Dolphins the ones apt for their shows, aquariums, sea worlds etc. Those are transported alive to their destinations all over the world. The other Dolphins, are driven to The eerie Cove to meet their humane destiny. And the story does not end there.

What does humane mean?

According to Merriam-Webster Dictionary Humane means “marked by compassion, sympathy, or consideration for humans or animals humane prison guards a more humane way of treating farm animals” Really? Where does that definition come from? Humanity? With all the misery that it spread among other species? Animals kill to eat, to survive, to lead a herd, they do not exterminate complete herds for fun, they do not send armies to other continents  to exploit crude oil, or whatever resources they could find so that a few ride mega yachts while the rest of their own species die of disease, wars and hunger. I am not naïve, but I´d still like to keep faith in humanity, and that maybe little by little more of us would defend that Dictionary definition of what humane means. Maybe we get to discover that compassion, love, and respect to others ( that includes all living creatures) is worth a try. Not only for their sake, but for ours. I know that I will never ever take my kids to a Dolphin Show, if they want to see Dolphins we might go on a Boat and look for them in the sea. Or maybe look for the closest Imax theater to watch Dolphins on a spectacular screen. https://www.youtube.com/watch?v=rFNyjJh7wNs Or maybe just snuggle in the same sofa marked by the shivers of the Cove to watch Ocean Stories about Dolphins and whales, nibbling on a sweet dehydrated organic mango slices instead of popcorn through the show https://www.youtube.com/watch?v=rFNyjJh7wNs
Read More
Back to Top
Added to cart
Shopping Cart
Close